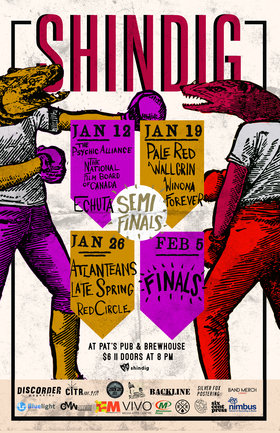 We have a new venue: Pat's Pub & Brewhouse at 403 East Hastings with locally made beer, jokes for beer and a great stage. CiTR DJs will spin after the bands! Get updates on twitter @citrshindig.

Along with exposure in the local music scene, entrants have the opportunity to win studio time, features in Discorder Magazine, music industry consultations, and showcases with Music Waste Festival, Canadian Music Week, and AMS Events.

Gun Control is a band of cut purses who have accumulated a great deal of wealth in their short lives, that must now be laundered through the mom and pop economy of rock and roll. It is made of Steve Mann on guitar and vocals, Justin Penney on drums, and Matt McEwing on bass. It plays shows in Vancouver, BC, Canada. Probably not anywhere else.... more info
Audio: City of No

The less you know about this band, the better. Rumor has it that they're very bad people, cruel to animals, misanthropic, frequently given to melancholy and intellectual dullards to boot. Stories of vicious infighting and rampant substance abuse follow them like a black cloud, and the threat of immediate collapse is constant. Fortunately they look ... more info
Audio: Hair Adjuster