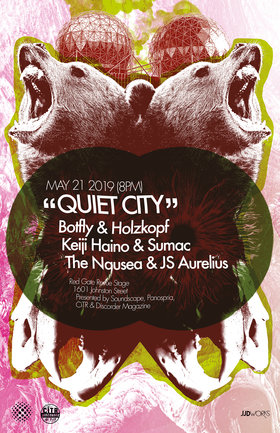 Music: Electronic / DJ, Punk / Metal / Hardcore / Noise
Japan’s fearless multi-instrumentalist and cultural provocateur Keiji Haino has made a career out of his free-form musical improvisations and diverse collaborations. Whether deconstructing American blues to a few rogue notes hanging across chasms of empty space in his solo endeavors, sparring with the nebulous fringes of psychedelia in Fushitsusha, or teaming up with musicians like Faust, Boris, Jim O’Rourke, Stephen O’Malley, John Zorn, and Peter Brötzmann for fleeting aural experiments. Haino’s work is never pre-planned or structured, but rather a completely spontaneous exploration of chemistry, texture, and dynamics.

Although his tenure is much younger than Haino’s, guitarist/vocalist Aaron Turner has covered a similarly large swath of musical territory across numerous projects and collaborations, from the sedated drones of recent projects with Daniel Menche and William Fowler Collins to the modern compositions of Mamiffer and all the way back to the restless evolutions of post-metal stalwarts Isis. Joined by cohorts Nick Yacyshyn (Baptists, Erosion) on drums and Brian Cook (Russian Circles) on bass, Turner has dissolved the rigid forms of heavy music, searching for a balance between disciplined precision and unhinged musical barbarism, crafting music that vacillates between meticulously detailed instrumentation and uninhibited forays into oblique abstraction.

Back in 2017, Keiji Haino and SUMAC met up in Tokyo to track a series of unrehearsed, completely non-premeditated sessions at Goksound recording studio. Captured across several reels of tape, the collaboration harnessed Haino’s tension-inducing use of empty space while pushing SUMAC’s dissident metal vocabulary. Throughout the course of its hour-plus length, their collaborative album 'American Dollar Bill - Keep Facing Sideways, You're Too Hideous To Look At Face On' pushes and pulls at the strictures of metal and bends the stylistic formalities of improvised music to create a sonic purge unencumbered by convention.