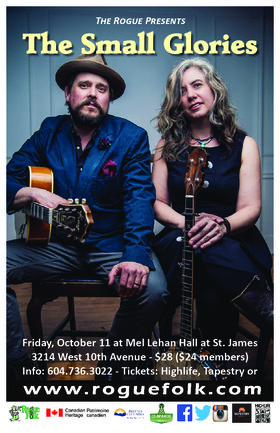 Music: Country / Bluegrass / Rockabilly, Folk / Celtic / Latin / World, Pop / Rock / Indie
Folk powerhouse pair The Small Glories are Cara Luft & JD Edwards. Luft is a Juno Award winner and co-founder of the folk trio The Wailin' Jennys. She has earned her rep as a gutsy live performer and insightfully honest songwriter, with serious skills on the guitar and clawhammer banjo. Edwards is a riveting live performer and prolific songwriter, a soulful singer blessed with one of the most versatile and powerful voices in Canada.
Their latest release is Assiniboine & the Red, an album that celebrates the Canadian Prairies. The album title references the junction of two rivers, the Assiniboine (pronounced ‘uh-sin-uh-boin’) and the Red, in the duo’s hometown of Winnipeg and celebrates the happenstance meeting of Cara and JD. The duo’s onstage chemistry and humor complements their energetic live performances and buoyant, Americana-inflected folk songs. Luft and Edwards’ exuberant harmonies bring to mind such duos as the Civil Wars and Shovels & Rope, but with a Northern spin.

CARA LUFT - Juno Award winner Cara Luft is an exceptionally talented guitarist with a vibrant demeanour and confidence earned from years on the stage. Shortly after releasing her first full-length album "Tempting the Storm" (nominated for a Prairie Music Award), Luft became a founding member of The Wailin' Jennys, recording the Juno award-winning a... more info